Mango Chicken Curry from a Somali kitchen in Minneapolis

Chef Jamal Hashi from Minneapolis, Minnesota says: “I owe it to the Italians that I make a  great marinara.” Hashi was born and raised in Mogadishu, the capital of Somalia, and immigrated to the US with his family as a teenager.

Hashi says that Somali cuisine has been shaped by diverse influences over centuries and that it is fusion that makes the cuisine special. “Somalia was divided into three  parts: The north was French, the middle was the UK ‘red coats,’ and the south, Italian.” He says: “You can’t say there’s Somali this or that, but each region is special. The  south is known for sweets, pasta, and marinara. The north gets influences from Djibouti. The way we use spice is different, from the north to the south.”

With respect to home cooking in his family growing up, Hashi says: “My father specializes in seafood.”

In Somalia, recipes are typically not written down, but passed down through family. Or, Hashi says: “People can guess, play around with the spices.” Hashi’s own interest  in cooking sparked at home. “Something about food called to me. It started as a hobby, in the home. I loved playing around with food, watching others cook for me.  There’s an artistry to it. Playing with fire, and the textures; it’s an art in a way. I love the gratitude of people when you serve it to them. It’s a good feeling.”

Somalia’s location on the Indian Ocean and the Gulf of Aden historically enabled active trading with India, Pakistan, and the Middle East, particularly Yemen. “We get mixed fusion, the cultures blended into one. So, we have curry with pasta. And beef marinara. We use both potatoes and pasta. Crepes with sesame oil and brown sugar is very common. In Ethiopia, their injera is soft and spongy, made from teff. Somali injera also includes butter and milk.”

Most Somalis observe halal dietary guidelines. He says the rules govern “mostly how the meat is prepped.”

While Somali cuisine may be unfamiliar to many Americans, opportunities to try it, particularly in Minneapolis, are increasing. According to the Minneapolis Foundation,”Minnesota is home to the country’s largest population of Somali residents.”

Estimates vary, but the Confederation of Somali Community indicates that, since 1991, 100,000 Somalis have settled in the United States, 40,000 of which have settled or re-settled in Minnesota. Safari Express is one of the estimated (by the Minneapolis Foundation) 120 African-owned businesses, including markets and restaurants, along Minneapolis’ Lake Street corridor.

Chef Jamal Hashi graciously accommodated the Heavy Table’s request to spend an evening grocery shopping and cooking with us, in order to provide more insight into Somali cuisine. He showed us how to make a dish not available on the menu at Safari Express: Mango (Ambe, pronounced “ahm-bay”) Curry Chicken with Somali Rice, which is a colorful dish, fragrant with the scents of cumin and curry. It’s both mildly sweet and spicy. Says Hashi: “The mango brings the spice down and balances everything out.” 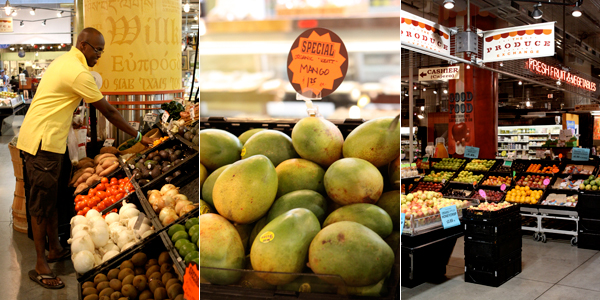 Hashi kicked off our evening of shopping and cooking with a stop at The Produce Exchange, in Midtown Global Market in Minneapolis, in search of ripe mangoes. “I love using organic produce at home and at Safari Express, too. It tastes like the way we do it back home. Fruits don’t taste like fruits here [in the US]. There are lots of good things about organics: They are good for your system, have fewer chemicals, and have health benefits over the long-term. And it supports local businesses.”

He says that a ripe mango “should be a little soft when you squeeze it. The firmer it is, the more sour it is. It doesn’t matter what color the skin is: it might be green, but still sweet.” As Hashi patiently sorted through the mangoes, gently squeezing each one, a process that took several minutes, he said: “Back home, we had a big mango tree behind our house. It was our neighbors’ tree, but half hung over in our area. In East Africa, you know they are ripe when they fall from the tree. Here, you have to squeeze it.”

“Somalia is not as dry as you assume it is. Some parts are dry, but fresh tropical fruits and vegetables are available. There are some fruits so common in Somalia that people grew them in their yards that aren’t available here. Back home, we used the real [sugar] cane. Here, we use the closest thing, organic brown sugar. In Africa, for coconut milk, we use fresh coconut, off the tree. But here, we get it from a can. That’s as fresh as we get.”

“The banana,” says Hashi, “is the number one fruit of all. J&J Distributing, which owns the Produce Exchange, provides more bananas to Somali restaurants in the Twin Cities than to all other businesses combined.”

In addition to purchasing a mango and organic brown sugar at The Produce Exchange, we also bought an onion (either red or yellow will work), serrano chiles (some green, some red — “Great color,” says Hashi), garlic, and a bell pepper (either green or red). Hashi says that for color and flavor, you can add in your choice of fresh or frozen vegetables: sugar snap peas, carrots, and broccoli. The variety allows “great presentation” and is “good for the eyes.”

“I like strong spices, like cardamom and cloves. And fresh sticks of cinnamon to add to rice or tea,” says Hashi. He mixes his own spice blends for Safari Express, but thinks several of the curry blends they sell at Holy Land are good for the home cook. He particularly likes the Gardenia Grain D’Or brand: “Really good curry.” Hashi says he can buy most of what he needs for home cooking at Holy Land Deli, since the meats are halal. Many of their grocery goods are imported from overseas. Minneapolis-St. Paul Somali families typically shop the halal markets on Central Avenue in Northeast Minneapolis, but rely on conventional grocery stores like SuperValu for fruits and vegetables.

For rice, Hashi’s favorite brand of rice is Aahu Barah, a Pakistani brand. “It’s the best rice, with the most consistent quality. Of course you pay for it.” Hashi also likes Zebra brand, which is cheaper, “but the consistency goes up and down. I find one I like, and stick with it.” Hashi held out some rice grains in the palm of his hand: “It should be yellow and nice, with no broken edges.”

Asked if there’s one dish that could be considered the national dish of Somalia, Hashi replies, “Goat meat. It’s a very sensitive meat. It takes some loving and caring; you have to nurture it, like a baby. Goat meat, which has a gamy taste, goes through three processes. First, you boil it in water to tenderize it and get the gamy taste out. In Somalia, you’d keep the broth to use for your rice [at Safari Express Hashi uses vegetarian broth]. Next, you oven roast it, marinating it in heat with spices for 20 minutes to a half hour, then you grill it with olive oil to seal the taste in and give it a good edge.” Hashi says that it’s the chef that makes or breaks this dish.

Hashi sums it up with this: “I think with all food, everyone has their own tastes. But the number one recipe is love. Use your creativity and imagination. People are tired of shortcuts in food. Where’s the love?”

Mango Chicken Curry from a Somali kitchen in Minneapolis

Serve on a plate with rice, the dish of mango pulp, and decorate with slices of tomato, lime, and a pinch of cilantro.